Welcome to My Life and Fun Facts

What happens when a Harvard computer guy becomes an MIT rocket scientist? With superb luck in timing (~1960) and colleagues, I got to participate in Apollo, arguably the coolest thing that has ever been done.

For the Apollo project, President John F. Kennedy asked us to reach forward for a piece of the 21st century and splice it into the middle of the 20th century, and we did. Now what could we do for an encore?

Good question. Regular computer science has gone on paying the bills, but for many of us the meaning of Apollo, its place in both American and world history, is an abiding fascination.

"Down to the Metal" is an old phrase describing software that utilizes an in-depth grasp of all the "wares:" soft, firm, and hard. Crucial in the Apollo spacecraft, key to reliability in the Space Shuttle, it's still essential when the speed and memory capacity of control computers is not enough, but the job must be done anyway. As my recent self-checking program for an instrument computer in the Lunar Reconnaissance Orbiter shows, there will always be a need. I adopted the phrase for my post-retirement "corporate" image. 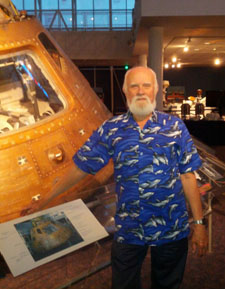 I'm standing beside the Apollo XII Command Module, faithfully preserved at the Virginia Air and Space Center. Some give credit for winning the Cold War to Apollo XII's pinpoint landing on the Moon, which proved once and for all that the success of Apollo XI was not a lucky fluke. Never again could Soviet ideologues claim technical superiority of the Communist "system" over the supposed decadence of the US-led First World.

This was taken in October 2012, shortly after I'd presented my Best-in-Conference paper (a far-reaching vision of the impact of data convergence on future air travel) to the 31st Digital Avionics Systems Conference in Colonial Williamsburg.

This site serves to anchor a blog and other social-media activities of interest to anyone curious about a life at one center of the Space Age, and to correct popular misconceptions about the period. It's also to generate interest in my first (now forthcoming) book, Left Brains for the Right Stuff: Computers, Space, and History, a light-hearted history for a general audience, covering computer science, navigation science, rocket science, and the system engineers at MIT who put them all together.